Add the Trigger Pull MC by Addy Archer to your TBR today!

JACE, Book 1 (Prequel):
One day.
One moment.
That’s all it takes for your life to shake on its foundations.

When Daniele catches her boyfriend cheating, it jumpstarts a turmoil of events. A straight forward biker ups her standards when he steps in and gives her what she needs to move on.

Jace didn’t expect a woman to slip underneath his skin until he meets a feisty doctor. Determined to hit the pause button on life, he makes sure to leave an unforgettable impression before they’re forced to part ways.

JACE is a standalone short story, the prequel of the Trigger Pull MC series with a bonus HEA epilogue.

STONE, Book 2:
Rylee’s life would have ended the day she met Stone. You might say he’s the one who saved her. If only she can allow herself to see it that way too, since the turn of events makes her question everything and everyone.

Protecting an innocent while simultaneously dealing with an ulterior motive will never work out the way it’s supposed to. Not when Stone is fully invested and finally decides to grab hold of what’s right in front of him. He thought no woman had what it takes to be the president’s old lady. In the end, it all comes down to his ability to protect the woman who claimed his heart. 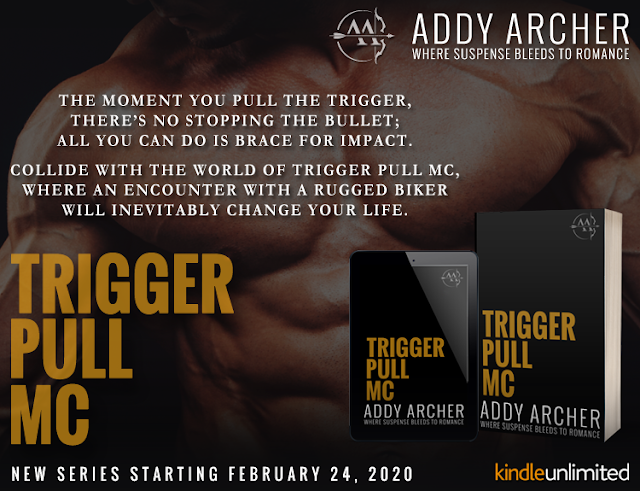 Meet The Author:
Addy Archer is a contemporary and romantic suspense writer who loves rough bikers twisted with a hint of romance and sassy women. She currently has one complete series: Rebel Rage MC. When she isn't working hard on her next book, she enjoys long walks with her dog, traveling, and reading.